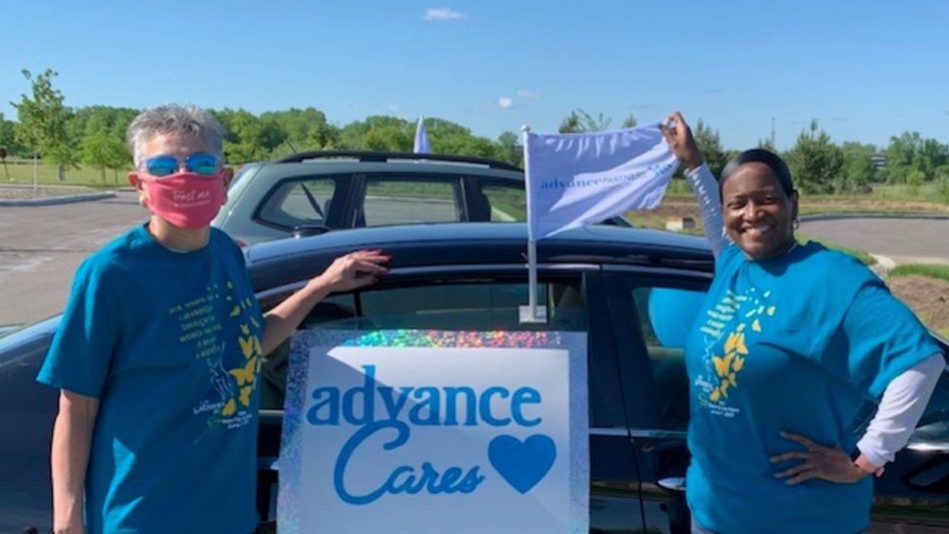 CLEVELAND, June 16, 2020 — An Ohio company helped turn an annual 5k that raises money for those affected by cancer into a car parade after social distancing restrictions made hosting an actual race impossible.

Race for the Place parade

This new version of the annual Race for the Place was quite a sight as a parade of 120 cars, draped in messages of support and led by police escort, honked through Northeast Ohio streets Sunday, June 7. The team from Advance Partners, who had participated in the traditional Race for the Place since 2007, suggested the idea for the motorcade when officials from The Gathering Place, a nonprofit who hosts the race as part of their year-long fundraising efforts, were looking for alternatives.

Diagnoses don’t stop for a pandemic

“Diagnoses don’t stop because of a pandemic, so we didn’t want to stop either,” said Advance Partners General Manager Jeremy Bilsky. “We do it every year and just about everyone in the company gets involved so we had to get creative.”

Advance Partners, a Cleveland-based company and subsidiary of Paychex that provides payroll funding for staffing firms, has raised over $100,000 for The Gathering Place through its own year-long fundraising efforts. All money goes to provide support and resources for those diagnosed with cancer and their families.

Every year on the first Sunday in June, which is also known as National Cancer Survivor’s Day, the annual Race for the Place is the nonprofit’s largest event and typically draws thousands to Northeast Ohio to participate.

“This is obviously an effort that’s near and dear to my heart so not participating just wasn’t an option for me,” said Jackie Howard, a 10-year breast cancer survivor. “The Gathering Place does so much for families and those affected I’m just happy we could do something, anything, to help.”

More than a sponsor

“Advance has become more than a sponsor. The commitment from their leadership and employees to raise dollars and awareness for The Gathering Place is amazing,” Seyranian said. “We’re grateful for their collaboration with us on Race for the Place and look forward to partnering with them for years to come.”

Advance Partners champions next-level staffing firm growth through payroll funding, back office solutions and strategic business coaching. We are 100% dedicated to the talent acquisition industry and proud to support businesses that put millions of people to work every day. As a Paychex company, we offer the resources, stability and innovation of a multibillion-dollar HR powerhouse, but that’s only half the story. We are also a company with the heart of a startup. We were founded in 1998 to serve as a growth partner to the go-getters of the talent acquisition industry and that remains essential to our core. We have shaped our close-range approach to customer care and funding to give staffing firms the trust, comfort and confidence to say yes to game-changing opportunities.